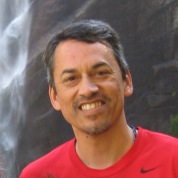 I had no intention of becoming an author.

I studied mechanical engineering (University of Houston, ’89), received my MBA (UofH, ’94) at night while working at a petrochemical plant just outside Houston and eventually found my way to New York and law school (NYU, ’97).

I have spent most of the past 19 years working as a lawyer, with the typical big-law start for 4 years (which included a couple of years abroad, in London and Frankfurt) followed by various in-house lawyer positions.  I was lured away from law to a tech start-up last year, but that ended poorly (and quickly) and I found myself in a bad job market in late 2015.

Luckily Hamilton came along.  I saw the show with my family in January and we all absolutely loved it, listening to the cast album literally every day for three months.  I read Ron Chernow’s Alexander Hamilton shortly (but not too shortly, given the book’s size) thereafter and then, since I had plenty of time on my hands, started visiting Hamilton-related sites around NYC and researching the history of each site.  The idea for my book was born.

The technical writing skills that I developed as an engineer and a lawyer, as well as my research, layout and editing experience at NYU (I was an Executive Editor on the NYU Law Review), served me well in researching and compiling the info and presenting it in a book.  And my ignorance let me get too far along to quit before I realized that there’s more to writing a book than just writing a book.

I live on the Upper West Side in Manhattan with my wife of 24 years, my two kids and our Jack Russell terrier, and I serve on the board of the nearby Bloomingdale School of Music, which has been providing open access to music education for more than 50 years, and I’m now back to practicing law with a firm in NYC.

My Tweets
Back to top